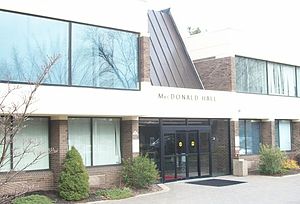 The college opened as Union County Junior College on October 16, 1933, in Roselle,[4] New Jersey, with 243 evening students.[5] With massive numbers of people out of work, there was strong pressure to educate people as a way to provide jobs; one account suggests that the official who "established Union County Junior College" was the Union county schools superintendent, Arthur L. Johnson, who was seeking ways for people to find employment and better themselves.[6] According to one source, it was the oldest community college in New Jersey.[4] Still, the college was "pitifully underfinanced" and rented space from a local high school.[6] Its initial budget was $17,000 for the entire school.[6] Its purpose at the time wasn't so much to teach undergraduates but to "provide jobs for unemployed teachers" during the Great Depression, according to historian Donald R. Raichle.[6] An early administrator was Dean Hubert Banks Huntley.[6] Raichle described the college's emerging mission was preparing "students in the first two years of college to make possible their later transfer to other colleges and universities.[6] But funding problems became even more severe, and a lack of funds from the federal government in the middle 1930s forced a change back from public to independent status.[6] Vocational training was emphasized; the curriculum catered to students who did not plan to further their education at four-year universities.[6] The college was to have four distinct homes from its founding until 1983.[6]