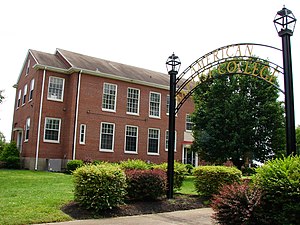 The idea of a seminary for the training of Black Baptist ministers grew out of conversation between National Baptist leaders and Dr. O.L. Hailey about the possibility of establishing a seminary for the education of its ministers, in 1913.[5] In a resolution presented by Dr. Edgar Young Mullins and adopted by the Southern Baptist Convention in that same year, the convention pledged its cooperation and appointed a similar committee. The committees of the two conventions met together and the following year recommended to their respective bodies that the college be established in Memphis, Tennessee. It was later decided to establish the College in Nashville. The present site of 53 acres was purchased with the help of the National Baptists in 1921, and a plan calling for the management of the seminary by a holding board and a governing board representative of the two conventions was adopted. The first building, Griggs Hall, was erected in 1923 and housed dormitory rooms, dining hall, library, and classrooms.