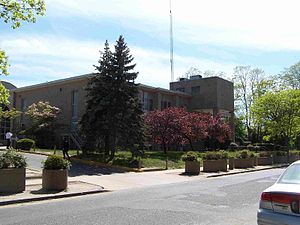 Beth Medrash Govoha is a successor institution to Yeshivas Etz Chaim, which was located in Slutzk, in what is today Belarus. That institution was led by Rabbi Isser Zalman Meltzer and by Rabbi Aaron Kotler, until it was forcibly closed by the Soviet Revolution of 1917, which banned all forms of Jewish studies. Etz Chaim was reestablished in Kletzk, under then Polish rule by Rabbi Aaron Kotler, where it thrived until World War II and the destruction of much of European Jewry. Rabbi Kotler escaped the Nazis in 1941 and came to the United States where he opened BMG in 1943.