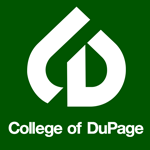 College of DuPage was established after the Illinois General Assembly adopted the Public Community College Act of 1965 and the approval of DuPage high school district voters in a referendum.[3] The college opened on September 25, 1967, under the leadership of the College's president, Rodney K. Berg, and Board of Trustees Chairman George L. Seaton. At the time, classes were held in office trailers and leased suburban sites throughout the newly established Community College District 502. Due to the college's students, faculty and staff having to drive from building to building for classes, the chaparral was adopted as the school’s mascot.[3] That year, The Courier, the school's student newspaper, published its first issue.