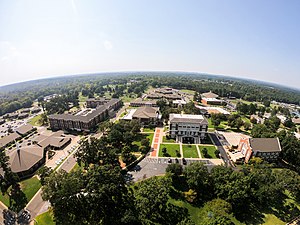 ETBU is located on the site of the former Van Zandt Farm at the highest altitude in Harrison County. ETBU was founded as the College of Marshall in 1912, after a campaign to create a Southern Baptist college in East Texas. The campus' first building, Marshall Hall, was completed in 1916. It was designed to house a gymnasium, library, chapel/theatre, administrative offices and classrooms. The College of Marshall opened the following year in 1917 as a two-year junior college and academy. The college was greatly enlarged during the tenure of President Frank Shelby Groner who served as president of the college from 1928 until 1942. It became East Texas Baptist College in 1944[6]