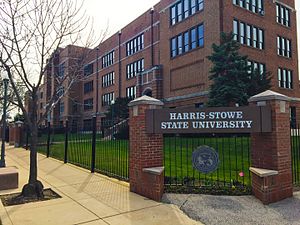 In 1857, St. Louis Public Schools established a normal school (teaching college) for white students; it was subsequently named Harris Teachers College, after William Torrey Harris, a former St. Louis superintendent of schools and United States Commissioner of Education. In 1863 philosopher Anna Brackett became principal of the school, and it became the first normal school led by a woman in the United States. In 1920, it was authorized to issue a four-year Bachelor of Arts in Education degree.[3]