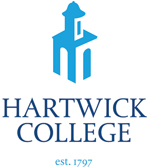 Hartwick College traces its history to the will of Lutheran minister John Christopher Hartwick, who died in 1796. A German immigrant who led several mission congregations of early settlers along the Hudson and Mohawk rivers in upstate New York, he was a rigidly pious man. The following year the executors of his will decided to establish a seminary in his name.[4] The first student graduated in 1803,[4] and in 1816 the New York State Legislature incorporated the school—the first Lutheran seminary in America—as a classical academy and theological seminary in Hartwick, near Cooperstown. The school moved to its present location in Oneonta in 1928, when the Seminary's trustees voted to close it and incorporate there as a four-year college. The land for the campus was donated by the City of Oneonta. Bresee Hall, today the oldest building on campus, was designed by noted architect John Russell Pope and built in 1928. It was listed on the National Register of Historic Places in 2004. The college's ties to the Lutheran Church ended in the 1960s and it now carries no religious affiliation.