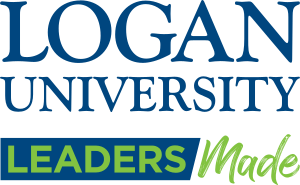 The college was named after its founder and first president, Hugh B. Logan, D.C. The first class of seven men and women enrolled on September 1, 1935. The college was housed in a converted residence at 4490 Lindell Boulevard, St. Louis' Central West End area. After five more students joined in February 1936, the college moved to a 17-acre (6.88 ha) estate at 7701 Florissant Road in Normandy. a suburb of St. Louis that November.