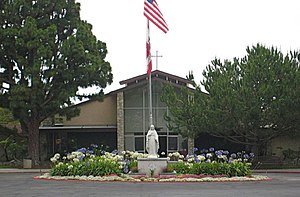 The college was established in 1932, by the Religious of the Sacred Heart of Mary, on Sunset Boulevard in Westwood. It began as a liberal arts college for women and was the first Catholic junior college in California. In 1947, it received accreditation as a four-year college. In 1960, a new campus was started on Palos Verdes Peninsula that included dormitories for on-campus residential living, an auditorium, dining facility, a library, and a chapel. The college’s preparation for a merger with Loyola University of Los Angeles in Westchester, was started in 1967. It separated its two-year and four-year programs. The two-year programs remained on the Rancho Palos Verdes campus and received accreditation, in 1971. In 1968, the four-year college moved to the Loyola campus. The merger was finalized in 1973, and became a new entity - Loyola Marymount University. In 1975, Marymount College moved to its present site. The Weekend College Program was added, in 1983. Accredited by Western Association of Schools and Colleges, the college offers degrees in both Associate in Arts and Associate in Science. The courses are conducted in various divisions, which include Computer Science, History, Business, Physical Education, Philosophy, Geography, Science, and Theatre Arts. Support services for students with disabilities are provided through the Learning Center. The Library at Marymount College houses an excellent collection of books and current periodical subscriptions. The college offers a wide range of activities to challenge the mind and enhance the spirit. Cultural events such as exhibits, concerts, films, and lectures are also conducted.