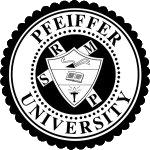 Pfeiffer originated from a home school operated by Miss Emily Prudden in the late 19th century. The school first began operation on the outskirts of Hudson, North Carolina, on Lick Mountain in Caldwell County, North Carolina. University archivist Jonathan Hutchinson said in 2013, "Our accepted founding date is 1885," referring to the date Prudden's first school began, "but Emily probably started the school in about 1898."[2] The school was called Oberlin, after John Frederick Oberlin, a French priest noted for his social improvement in the Alsace Region of France. The school was later endowed by Mrs. Mary P. Mitchell, and the name was changed to the Mitchell School.