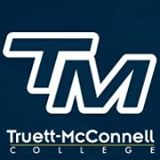 On July 23, 1946, the Georgia Baptist Convention held ceremonies at Cleveland, Georgia, to mark the establishment of a new two-year liberal arts college named for Truett and McConnell. Truett-McConnell College, operating in temporary quarters on or near the town square in Cleveland, first opened in September 1947, when it enrolled a class of 55 students.[2] The school was first accredited in 1966 to issue two year degrees.[3] In December 2002, the institution was approved by the Southern Association of Colleges and Schools to offer four-year degrees.[4]