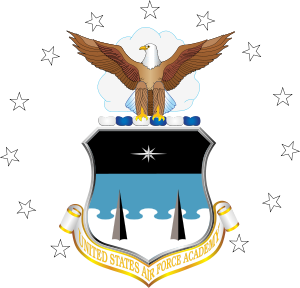 The United States Air Force Academy (USAFA) is a United States service academy immediately north of Colorado Springs, Colorado. It educates cadets for service in the officer corps of the United States Air Force and United States Space Force.[8] It is the youngest of the five service academies, having graduated its first class 63 years ago in 1959, but is the third in seniority.[9][10] Graduates of the academy's four-year program receive a Bachelor of Science degree and are commissioned as second lieutenants in the U.S. Air Force or U.S. Space Force.[11] The academy is also one of the largest tourist attractions in Colorado, attracting approximately a million visitors each year.[12]