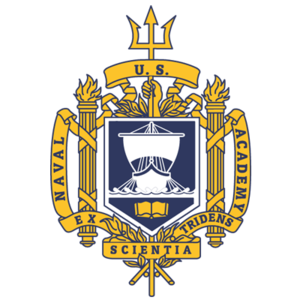 The United States Naval Academy (US Naval Academy, USNA, or Navy) is a federal service academy in Annapolis, Maryland. It was established on 10 October 1845 during the tenure of George Bancroft as Secretary of the Navy. The Naval Academy is the second oldest of the five U.S. service academies and it educates midshipmen for service in the officer corps of the United States Navy and United States Marine Corps. The 338-acre (137 ha) campus is located on the former grounds of Fort Severn at the confluence of the Severn River and Chesapeake Bay in Anne Arundel County, 33 miles (53 km) east of Washington, D.C., and 26 miles (42 km) southeast of Baltimore. The entire campus (known to insiders as "the Yard") is a National Historic Landmark and home to many historic sites, buildings, and monuments. It replaced Philadelphia Naval Asylum, in Philadelphia, that served as the first United States Naval Academy from 1838 to 1845, when the Naval Academy formed in Annapolis.[4]