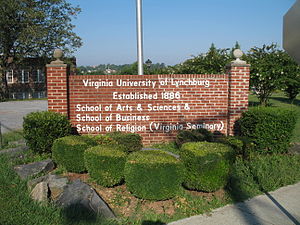 Virginia University of Lynchburg is the oldest school of higher learning in Lynchburg. The school was founded in 1886 and incorporated in 1888 by the Virginia Baptist State Convention as the coeducational "Lynchburg Baptist Seminary". Classes were first held in 1890 under the name Virginia Seminary.[4] With the offering of a collegiate program in 1900, the name was again changed, to Virginia Theological Seminary and College. In 1962, the institution was renamed to the Virginia Seminary and College. Finally, in 1996, the school was given its current name. The campus includes three historic academic buildings on 6.82 acres (2.76 ha): Graham Hall (1917), Humbles Hall (1920–21) and the Mary Jane Cachelin Memorial Science and Library Building (1946). These buildings and the Hayes Monument (c. 1906) comprise a historic district,[5] which was listed on the National Register of Historic Places in 2010.[1]