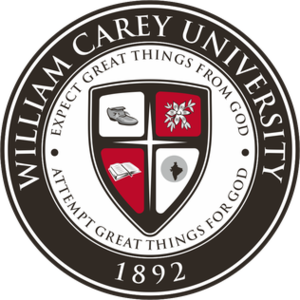 William Carey University was founded by W. I. Thames in 1892 as Pearl River Boarding School in Poplarville, Mississippi. A disastrous fire destroyed the school in 1905, and in 1906, with the backing of a group of New Orleans businessmen, Thames reopened the school in Hattiesburg as South Mississippi College. Another fire destroyed the young institution, forcing it to close. In 1911, W. S. F. Tatum acquired the property and offered it as a gift to the Baptists, and the school reopened as Mississippi Woman's College. In 1953, the Mississippi Baptist Convention voted to make the college coeducational, which necessitated a new name. In 1954, the board of trustees selected the name William Carey College in honor of William Carey, the 18th-century English cordwainer-linguist whose decades of missionary activity in India earned him international recognition as the "Father of Modern Missions." The gained official university status in 2006.